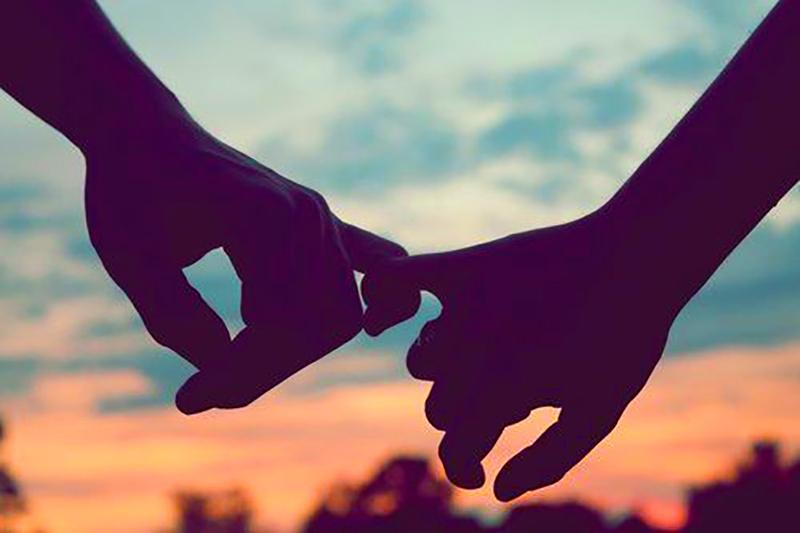 Whether you’re newly dating someone, or have been your love for a long time.

Here are a couple signs that may help you know for sure, that you’ve found the ONE!

1. He thinks you’re the best at what you do. He admires and appreciates your competency and is pretty sure you could be president of everything if you set your mind to it.

2. He tolerates your many quirks and even finds some of them awesome.  He doesn’t have to think your myriad of eccentrics are ~ZoEy dEsChAnEl aDoRaBlE~ but he does find many of them endearing and hilarious. For instance, he thinks the time you paid $100 for sweatpants (because you saw a pic of Gigi Hadid wearing them and she looked amazing) that made you look like a chubatron reject from a Kanye West fashion show was crazy funny. If you can both celebrate (or at least laugh about) your weirdnesses, that’s a keeper.

3. He’s always looking at you. You know, looking. You know what I’m talking about.

4. He knows how you take your coffee. He knows that a Double Tall Vanilla Soy Latte is the key to your underwear drawer.

5. He knows all about your allergies. He even knows that you’re not technically allergic tomatoes, you just really really hate them and if they touch your burger, you might actually cry.

7. He knows your Love Language. He knows the ways in which you like to be loved, and he loves you in those ways. (You’ve done the same for him because you are an awesome partner.)

8. He treats your pet like she’s your kid. He gets that Maddie the Cattie is more important to you than an actual pile of gold and treats her accordingly.

9. He thinks you’re prettier than the Statue of Liberty. Or, you know, every other hot chick out there. He doesn’t disparage other women’s looks to compliment yours, but he lets you know you’re the hottest thing in a million mile radius on the regular.

10. He thinks you’re smarter than Einstein. He wants you on his pub trivia team because he knows you’ll bring it. Even if you only think you’ll do well if reality TV is a section, he’s pretty sure you’d kill in the “Former Eastern European Dictators’ Pets” category.

11. His gifts are hella special. They don’t have to be frequent or even on the “right” days, but everyone once in a while, he’ll present you with something that makes you legit cry because it’s so damn special. Like the time he had his friend paint you a picture of a bear skating backward on a lake of frozen hot chocolate because it’s a hilarious and delicious reoccurring dream you have. Or he bought you tickets to the “Formation” tour even though he had to talk to a Ticketmaster rep for over an hour, which is basically the pain equivalent of giving birth to a ball of knives.

12. Your enemies are his enemies. Like, if he ever meets Mark from middle school who called you fat and then ate your pudding cup, he will glare at him so hard.

13. When you’re spooning, you fit ~perfectly~. Same goes for hand-holding.

14. You finish each other’s sandwiches. And sentences.

15. He can totally fake your voice in text. You’re driving and you need him to text your best friend and he uses the right number of exclamation marks? MARRY HIM.

16. You have similar opinions on the Big Three: religion, politics, babies (as in, yay or nay to babies in  your life together). You don’t have to be, and probably shouldn’t be, 100 percent on the same page about everything, but these are big ones and the fact that you agree makes things a lot easier.

18. You’re sexually compatible. To put it bluntly: You both like the same stuff and are supportive of each other’s desires, and your bedroom is basically a party zone for sex angels.

19. He just feels “right.” This one is hard to put a finger on but when you feel it, you’ll know it. Everything is easy and it fits and makes sense. You’re not looking for a way out, and neither is he. You’re a team and you could basically solve world peace together if you weren’t so busy watching Netflix and doing it.