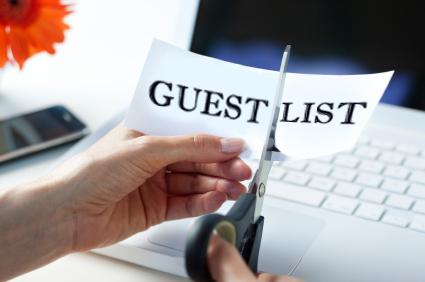 TIPS FOR CUTTING DOWN YOUR WEDDING GUEST LIST WITHOUT THE GUILT

Unless you’ve got unlimited funds, there’s no way you’ve ever going to be able to send out an invite to every single person you like. While it would be amazing to have everyone you know and love in attendance, even couples with the biggest of budgets have to draw the line somewhere.

Rest assured that a guest list that is bulging at the seems is a common wedding planning occurrence, and believe it or not it can be remedied somewhat painlessly.

First things first, write down the names of everyone you think you want to invite and then categorize them into the following:

A = I can’t imagine my wedding day without them, NEED them there

B = They won’t make or break the day, but they will be missed if they’re not there

C = We probably won’t miss them, but they would add to the fun of the day

Now you’ve got something to work with! Obviously your A list is untouchable. Your B list will most likely get invites but they are up for debate when it comes to cutting numbers. The C list won’t receive an invite unless people from the A and B list RSVP no. It may sound a little cutthroat but this will instantly make your list much more manageable and nobody ever has to know whose names were on what list.

Sending your invitations in waves is the best way to keep numbers where you want them without having to cut people from the onset. By sending your invites earlier than scheduled you will have the option to move people up from your B and C list with the notifications of early cancellations. As long as you ensure you leave enough time for the final invites to be sent out so that guests have plenty of notice to make travel arrangements then you will have a wedding filled with people who you love and care about.

Focus On The People That Mean The Most to You

Throw out the rule book and invite the people that are the most special to you. This is your day after all and you want people there that are going to genuinely appreciate sharing this once in a lifetime moment with you and truly add to the magic of the event. Just because you invite a cousin from one side of the family, it doesn’t mean that you have to invite a cousin from the other side. Despite what your parents might think, some friends will be more valued guests than certain family members, especially if those family members are long lost cousins or people that didn’t even know you were engaged! Focus on the people that are present in your life now and who you can envisage still will be in 10 years time.

When getting down to the nitty gritty you have to make tough decisions about who makes the cut and who doesn’t, in this case it’s always good etiquette to think about who is paying for the event. Traditionally the bride’s parents foot the bill and this means that they have a little more say over who’s in and who’s out, but the same should be applied to whomever is funding the wedding. If your funding the wedding yourself you’ll have to be as diplomatic as possible about the weighting of the guest list to ensure that both you and your future bride/groom are happy.

Don’t feel obliged to invite all single guests with a +1. Instead invite them solo and seat them together so they will mix and mingle. So how do you actually go about telling your beloved friends and family that you want THEM there, but you don’t have the space for some random other person to come with them? Address your invites clearly to avoid confusion, be specific and use the guests name on the invite. Depending on the guest it may or may not be a big deal. If in the instance you have a friend travelling all the way across the country and they won’t know anyone else at the wedding except you, then it may be an good idea to make allowances in this case.

Do The One Year Test

This tip is as simple as it sounds. Scan through your  guest list and cut anyone who you haven’t seen in the last year (unless they fall into category A). I think it’s safe to say that they’re not high on your priority list if it’s been more than a year since you last met up. There are obviously a few exceptions to the rule, such as a friend that lives a costly flight away, but as a general guide it works perfectly. Don’t feel pressured into inviting everyone you’ve been friends with at some point in your life, your wedding is about celebrating with those closest to you right now.

Would You Be Offended If You Weren’t Invited To Their Wedding?

Ask yourself how you would feel if you weren’t handed an invitation to their wedding. Your answer should indicate how important it is to invite them to yours. Wedding invites tend to be reciprocated so if you would feel upset about being missed off of their guest list, it might be a good idea to include them on yours. Obviously this method doesn’t work if you’re super sensitive and would be offended by not getting an invite to everyone’s wedding!

Make The Event Adults Only

One of the quickest ways a wedding guest list can spiral out of control is when you start factoring in everybody’s children. While you may ideally like to invite everyone and their families, where do you draw the line? By hosting an adult only event you’re making the decision easy and ensuring that there’s more seats available for other guests. One great way to deal with the issue is to arrange for a ‘babysitter room’ somewhere at the venue where guests can drop off their children for the duration of the wedding and reception dinner, before allowing the kids to come and join in on the evening entertainment.

Cutting your guest list right down to just your family and closest friends is one of the most effective methods for keeping the list a manageable size and avoiding offending people at the same time. By organizing a more intimate event, it’s much simpler to decide on the list, and those who don’t get an invite will understand the situation. You can always organize a cocktail party to celebrate the big news with your wider circle of friends and colleagues once you get back from your honeymoon.

Don’t Let Yourself Be Pressured

Lastly, don’t feel pressured to invite someone that you really aren’t excited about, or just because you were invited to their wedding. You may feel bad about cutting people, but the reality is that it is one of the best ways to save lots of money so you can still have the wedding of your dreams. Create a united front with your partner and stand your ground when questioned. The people that truly love you will understand.